On our Baltic Amber Way tour you will get acquainted with the being of the amber in Latvia, Lithuania and Kaliningrad region, covering its history, output, procesing and jewelry. The route streches for 418 km along the Baltic coast.

It is stated that the area where amber is being washed ashore starts from the Riga Bay in Latvia and near Ventspils fine pieces of amber are sometimes found. Therefore, Venstpils is considered the place where the Baltic Amber way starts. Here are two best ways how to get to Ventspils:
1) Arrive in Riga airport and take our private transfer to Ventspils (~4 hours), optional 2 hours Riga Old Town guided walking tour.
2) Arrive in Ventspils port by ferry from Travemunde (Germany), Lubeck (Germany), Nynashamn (Sweden). Best available rates for the flights and ferries on request. 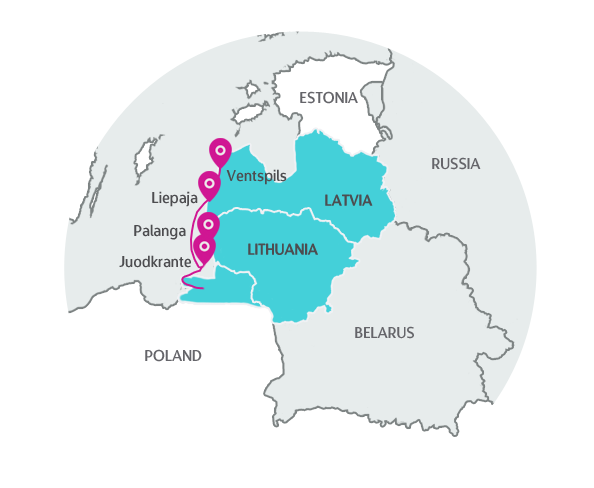 Day 1 Arrival in Ventspils Arrival in Ventspils, meeting and transfer to the hotel.
Overnight in Ventspils.
Day 2 Ventspils - Pavilosta - Liepaja Breakfast at the hotel.
From morning we visit the most beautiful and interesting sights of Ventspils including visit to Ventspils museum. At a modern Ventspils Museum, founded in the former castle, of the Livonian Order and housing various collections, there are some samples of archaelogical amber finds. After early lunch we continue our Baltic Amber way to Pavilosta - a calm unspoiled spot by the Baltic sea. The Baltic Sea after strong spring and autumn stormy winds washes ashore quite a lot of amber here. There are 5-6 permanent amber catchers in Pavilosta. On this afternoon we will have unforgettable experience of collection amber with the professsionals. In Pavilosta we see the biggest stone of Kurzeme in the sea. We continue our way along the coast to Liepaja, evening hotel check in.
Overnight stay in Liepaja. 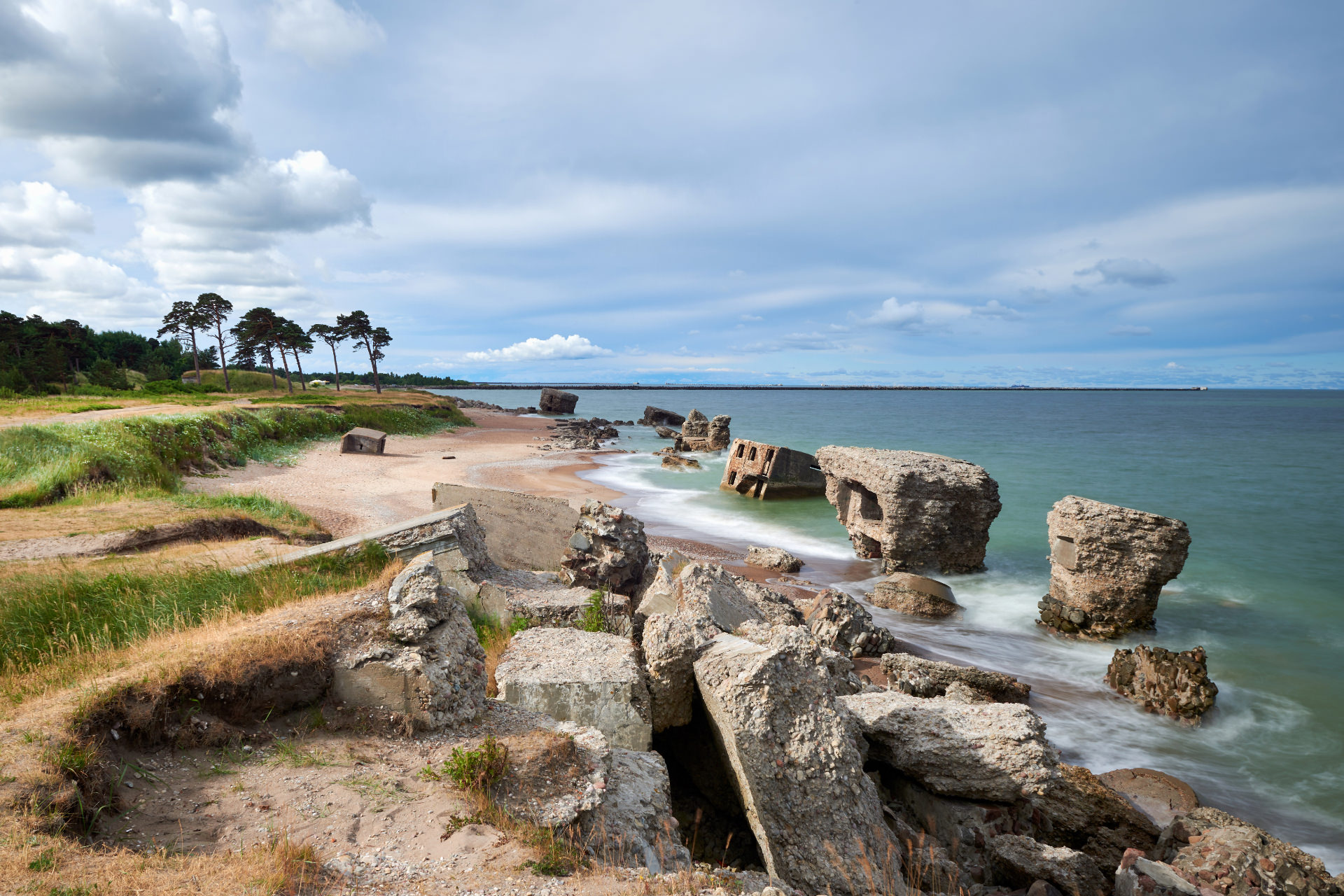 Day 3 Liepaja - Nida - Sventoji - Palanga Breakfast at the hotel.
Today we explore Liepaja on the sightseeing tour and visit Liepaja History and Art Museum, which is rich in various collections: archaeological finds, ethnography of the Southern Curonia, Liepaja of the medieval period and the 19-20th centuries, and a small exposition of amber. Great number of amber items from the museum vaults is waiting to be exhibited. Furher we head to Liepaja Amber clock and beads. In 2003 during the celebration of the 750th anniversary of the Liva village, which was the start of Liepaja, the citizens and the visitors of the city donated pieces of amber of various size – more than 50 liters of amber were collected! The bigger pieces were threaded into 123 m long beads and the rest were used for making a 4-meter tall sun dial, which was erected on the promenade along the Tirdzniecibas canal. The amber beads are exhibited at the Liepaja's craftsmen's association. After lunch we continue to Nida, where the final object of the Baltic Amber way route in the territory of Latvia is located. It is “Gaigalas” house in the Nida village, which is close to the Latvia-Lithuania border. Afterwards we cross the border to Lithuania and after 4 km we see Zemaiciu Alkas in Sventoji. Zemaiciu Alkas is an attempt to reconstruct an ancient Samogitian pagan shrine with a paleoastronomical observatory. In ancient times, Lithuanians would gather at such shrines to pray and make offerings to the gods. Nowadays, pagan festivals are held there: the Festival of Goddless Milda (May 13), the Rasa (Dew) Festival (June 22), and the Spring Equinox (March 22). The biggest festival of the Palanga Pagan Society is the Jore Day (April 23). Once celebrated as the beginning of pasturage, today the Jore Day attracts both society members and tourists by its rituals and ceremonies, during which offerings of amber dust are made to the gods. As last for today we visit the Sventoji treasure – an old fisherman's settlement by the mouth of the Sventoji River. One of the most interesting Stone Age amber treasures found here in 1966-1976. The finds of the excavation are exhibited at the Lithuanian National Museum and the Palanga Amber Museum.
Overnight stay in Palanga.
Day 4 Palanga Breakfast at the hotel.
After breakfast we start the Palanga sightseeing tour, which includes such important highlight of the Baltic Amber way as Palanga Amber Museum. It is the treasure of the town. The museum was founded in 1963, in the spacious mansion of Court Tyszkiewicz, built in 1897 by F.Schwechten. The mansion is surrounded by a big and well kept botanical park, covering 100 ha. In the 15 halls of the museum there are exhibited 4500 amber artifacts. The most interesting exhibits of the Palanga Amber Museum display are amber inclusions, the unique pieces of amber and archaelogical finds. Further we visit Palanga amber processing workshop. Historians maintain that the amber-processing craft was developing rapidly and as early as 17th century Palanga already had amber workshops, not just individual craftsmen, who would produce and sell amber items. In the 19th century, Palanga became a major center of industrial amber processing. At the workshop we will observe the entire course of amber processing starting from the raw material to the finished jewelry. You can also buy amber articles here. Our Baltic Amber way continues to Antanas Moncys house-museum, which is one of the few modern art museums founded in Lithuania after the restoration of independence. A famous Lithuania sculptor of the 20th century (1921-1993), who lived and created in Paris, gave his works to Palanga. The range of the materials of his works is very wide, including timber, stone, tin, amber, metal, plastics, slate, bones, clay, etc. The scale of the emotions is ample, too, and covers pain, longing, humour, passion, poetry, dreams, loneliness, etc. His works were exhibited together with the creation of H.Moor, A.Calder, H.Arp. A.Moncys worked together with M.Chagall, Jean and Joel Martell. You will have a good opportunity to see the unique exposition of A.Moncys' sculptures and discover some sculptures of amber, which his friends used to take him to Paris as gifts during the Soviet years. The visitors are allowed to touch the scupltures!
Overnight stay in Palanga. 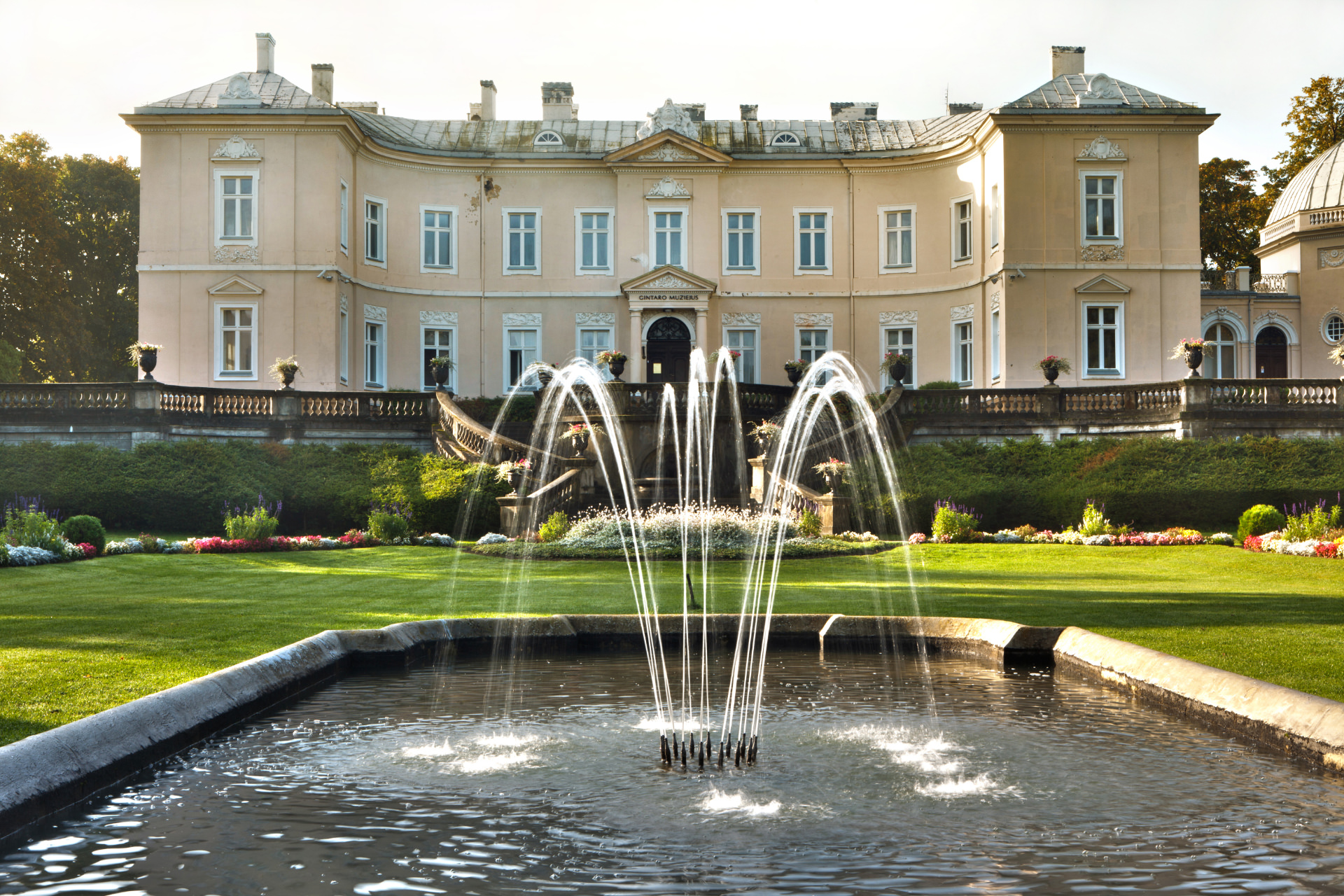 Day 5 Palanga - Karkle - Klaipeda - The Curonian Spit - Juodkrante Breakfast at the hotel.
On morning we leave Palanga and head to Karkle, where we see amber-catching places. The scientists who have conducted research of amber resources in Lithuania maintain that at present the largest amount of amber is washed ashore near the Karkle village in the territory of the Seaside Regional park. In the middle of the 18th century local inhabitants had to pay a 1,5 guilder fee to the lord of the manor for every amber-cathing net. In 1739, Palanga and Sventoji had 10 of such taxable nets each. At present, about 30 amber catchers search for amber in the area of Karkle. Our amber way leads us to Klaipeda, where we explore Klaipeda Old Town and visit the History Museum of Lithuania Minor. In ancient times amber necklaces were used not only as decoration, but also as currency. The Archaelogical amber artifacts, dating to 5th-6th centuries are on display at this Museum. After lunch in pleasant Klaipeda Old Town we take a ferry to the Curonian Spit and have a sightseeing tour including two objects of the Baltic Amber way. The Curonian Spit is a peninsular dividing the Curonian Lagoon from the Baltic Sea. In 2000 it was included into the UNESCO World Heritage list as a unique object of nature and cultural heritage in the Baltic Sea region. At present Neringa is a prestigious seaside resort. First object of our amber interest is located in Nida and it is the Mizgiriai Amber gallery-museum originated from a private amber workshop, where one could buy unique amber articles. The museum was opened in 1998, though the exhibits had been collected for 20 years. The museum owns and displays a great collection of amber artifacts. Seeing on the way other famous the Curonian Spit sights we head to our second amber object – the Amber Bay in Juodkrante. In 1854-1855 amber was discovered in the vicinity of Juodkrante and 2250 tones of amber were mined in this place. The average production of amber during the period of 1860-1890 was about 75 thousand tons per year. In 1890, when the production decreased, the mining of amber in Juodkrante was terminated. In 1882 many valuable pre-historic amber artifacts were found near Juodkrante. The Kleb's (the professor at Konigsberg University) collection is also referred to as the Juodkrante treasure. The collection has been exhibited at various exhibitions and the Palanga Amber Museum owns its copy.
Overnight stay in Juodkrante.
Day 6 Juodkrante Breakfast at the hotel.
Enjoy a relaxing and lasy day on the Curonian Spit.
Overnight stay in Juodkrante. 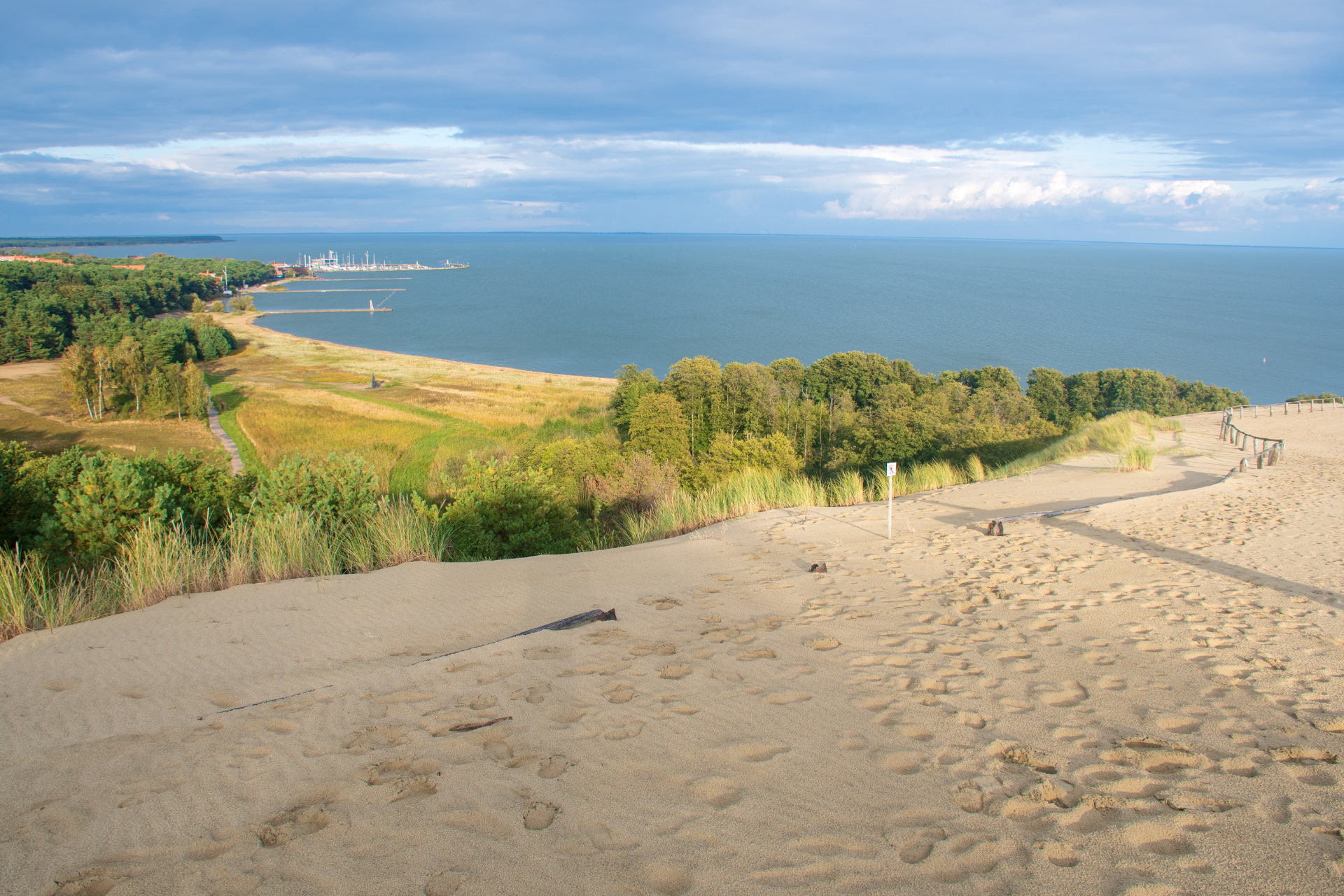 Day 7 Juodkrante - Jantarnyj - Kaliningrad or Juodkrante - Vilnius (option to shorten this tour to 7 days and depature home from Vilnius airport) Breakfast at the hotel.
After breakfast transfer to Vilnius airport for the departure home (~5 hours). If you have a late flight we recommend you 2 hours Vilnius Old Town guided walking tour, which will be a nice addition to your visit in the Baltics.
For passionate Amber lovers we offer to continue our Baltic Amber way to Kaliningrad region and visit some more places closely connected to the amber.
After breakfast we head to Jantarnyj where we see museum exposition of amber artifacts. There is a permanent exhibition of amber jewelry for sale. For the attraction of visitors there are wooden constructionswith the exterior glued up with pieces of amber – the Amber Pyramid. You are invited to enter the pyramid and experience the energy of the “Sun Stone”. Next our stop is one of the most impressive objects of the Baltic Amber way in Kaliningrad region. It is world famous industrial amber mine in Jantarnyj. The mining of amber started in the second half of the 19th century. During the Soviet period the production reached 1000 t of amber annually and now it has decreased to 400-600 t. This is the only manufactory in the world mining amber and processing it in the industrial amounts. In the show room of the plant there is an exposition of the articles produced by the local craftsmen from the local raw materials. Also we visit newly built and one of the most modern manufactories of the artistic amber processing in Kaliningrad district – Amber Lagoon.
Overnight stay in Kalingrad.
Day 8 Kaliningrad Breakfast at the hotel.
Today we explore Kalingrad on the morning sightseeing tour. Our main aim is Kalingrad Amber Museum. The only amber museum in Russia was founded in 1979 in the very center of Kaliningrad in a fortification castle of a very peculiar plan. At present in the 28 halls of the museum making up 1000 m2 there are more than 5000 amber items. The museum boats of the second largest piece of amber in the World weighing 4280 gr. The inclusions and amber decorations for the noblemen are of special interest. Afterwards we visit the Amber Cabin on the “Vitiaz” ship. This small exposition on the ship “Vitiaz” provides an opportunity to see amber items brought from 34 places of the Earth.
Overnight stay in Kalingrad. 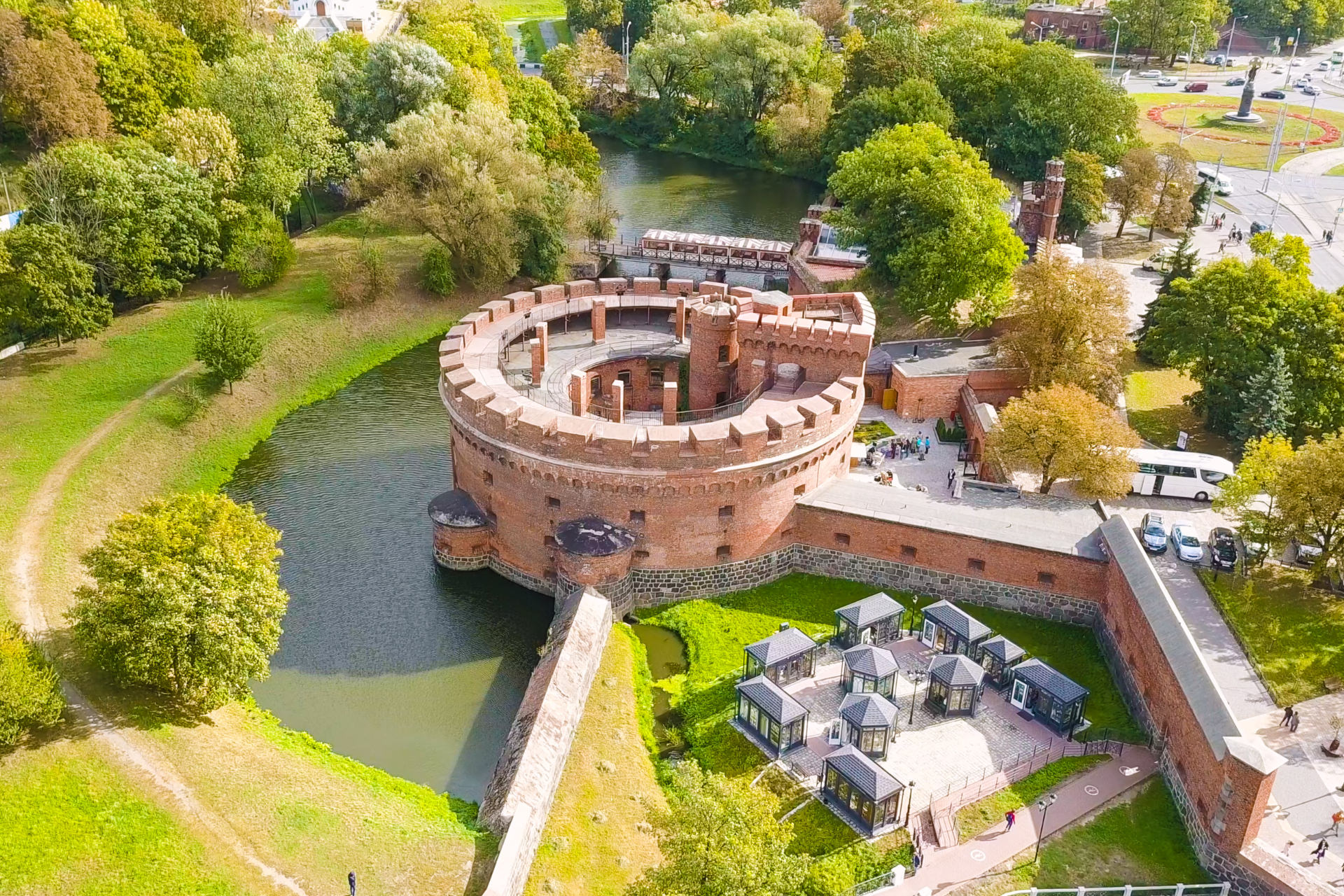 Day 9 Departure from Kaliningrad Breakfast at the hotel.
After breakfast transfer to the airport and flight back home.