Let’s go East, full speed ahead! Three gorgeous towns, Helsinki, Tallinn and St-Peterburg walked and praised by the tsars. They left their fame in countless ways. In Helsinki, Alexander II built up the Uspenski red brick cathedral in 1868 with huge marble columns inside. Peter the Great built a whole new capital at the mouth of the Neva River in 1703, it is none other than St-Petersburg giving Russia an access to the Baltic sea, a gigantic effort giving birth to the intellectual capital of Russia. And finally Moscow, valiant and fearless city, the true heart of Russia, many times rebuilt sprawling like a mad spider web, now home to 12 million people. This trip will take you to the places where the tsars lived, prayed, hoped and celebrated, where they were adorned or were torn by tragedies and wild passions shaking alongside their vast empire. Passions we invite you to share in this amazing trip. 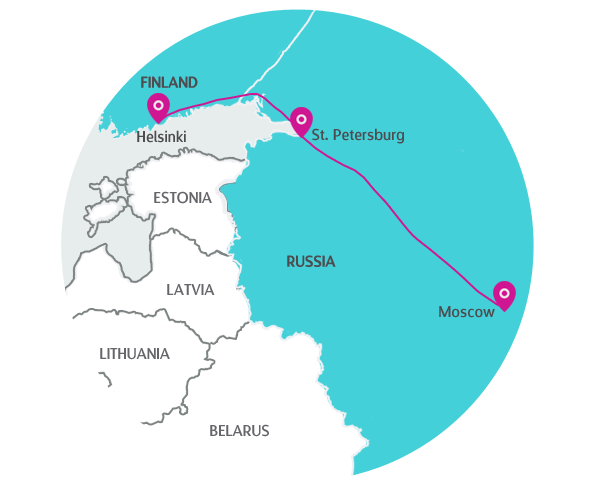 Day 1 Sunday: Arrival in Helsinki Arrival in Helsinki, optional transfer to Hotel Glo Art**** or similar, check-in, welcome meeting.
Day 2 Monday: Helsinki Helsinki is located at the crossroads of Western and Eastern culture and this is reflected everywhere in the green and lively Finnish capital. The sightseeing tour takes us around the harbours and the Senate Square with the Lutheran Cathedral, up central Mannerheim Street and by the Parliament Building, the Finlandia Hall, and the Sibelius Monument and for a visit at the famous Church-in-the-Rock. The afternoon offers an optional excursion to Suomenlinna Fortress, a cultural treasure which construction was started in the 18th century as a sea fortress. Located on an island, fortress is a unique attraction for visitors. The evening offers optional Finnish dinner at Restaurant Salve. 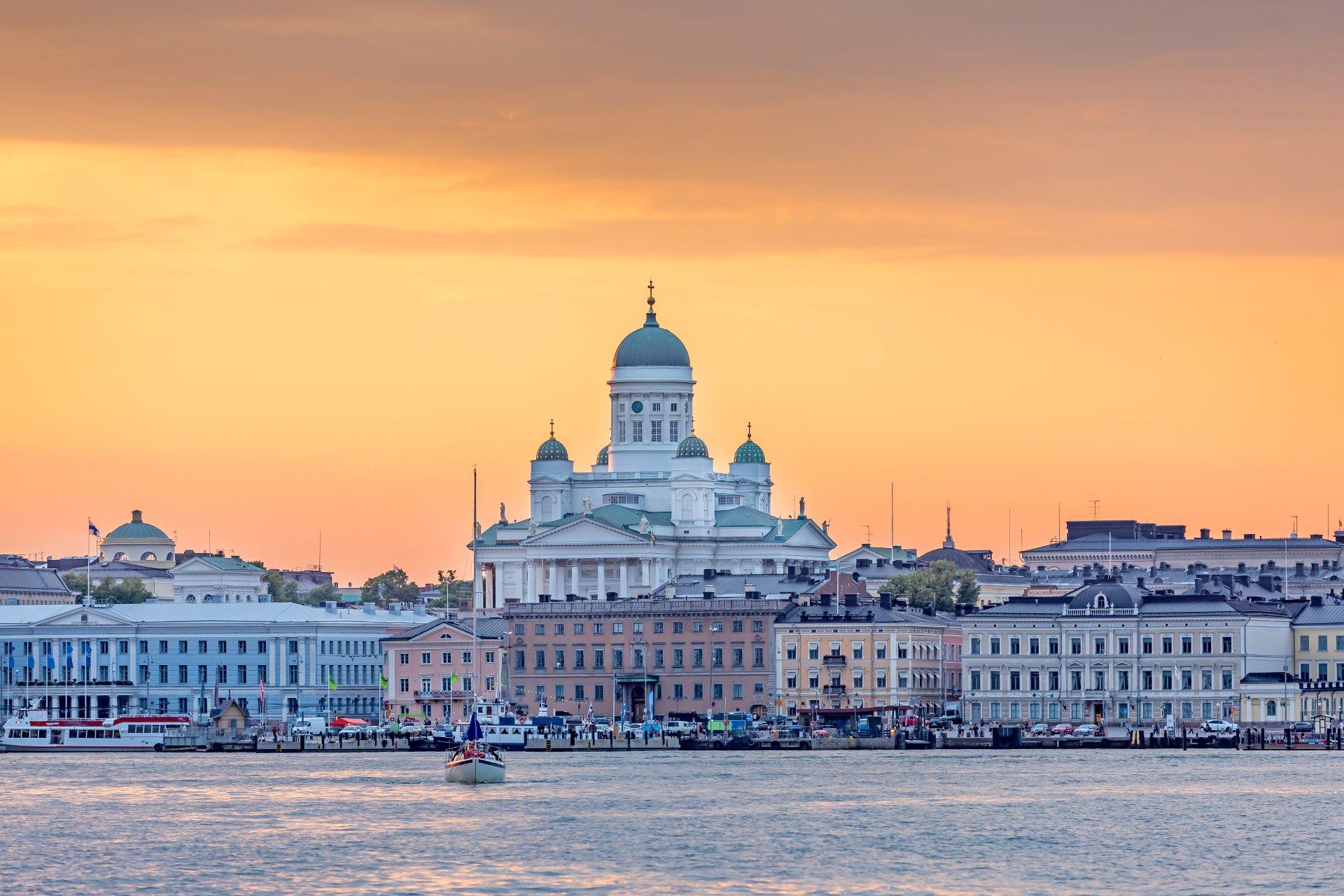 Day 3 Tuesday: Helsinki - St. Petersburg Today we continue eastbound to St. Petersburg. Shortly after crossing the border into Russia we arrive in Vyborg, where we take time for a short sightseeing tour and a photo-stop at Vyborg Castle. In the late afternoon we arrive in St. Petersburg and check-in at Hotel Sokos Vasilievsky**** or similar.
Day 4 Wednesday: St. Petersburg St. Petersburg is an amazing city. Its imperial palaces and museums enjoy worldwide fame, while the Neva River and the many canals have deservedly given the city the title of Venice of the North. During the morning sightseeing tour we get acquainted with all the splendours of the city: the Peter-Paul Fortress, the Winter Palace, St. Isaac’s Cathedral, the Church of the Bleeding Savior, the Nevsky Convent and much more. The afternoon offers an optional excursion to Zarskoye Selo with the impressive Catherine’s Palace and the Amber Room, which vanished during World War II and was restored for St. Petersburg’s tri-centennial celebrations. In the evening enjoy an optional visit to the Nikolaevsky Palace with an exciting Russian folklore show and Russian „champagne” and snacks. 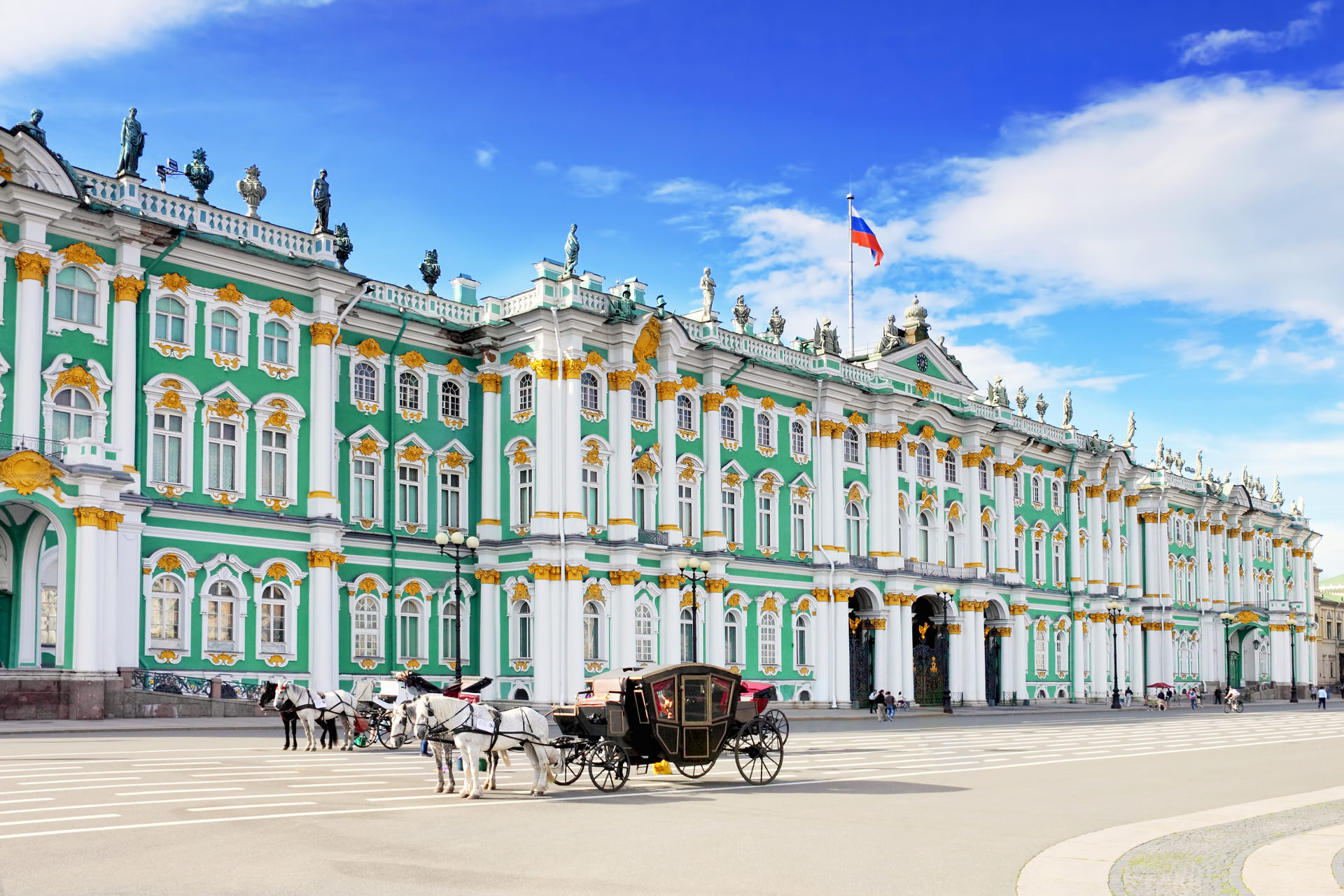 Day 5 Thursday: St. Petersburg The morning is reserved for an optional visit to Peterhof, an uncontested masterpiece of the time of Peter the Great, with the impressive Grand Palace, Grand Cascade and Water Avenue and its wonderful parks. In the afternoon, an optional visit to the world-famous Hermitage Art Museum is offered. In the evening enjoy an optional Russian dinner at Restaurant Pryanosti & Radosti.
Day 6 Friday: St. Petersburg - Moscow The early morning is reserved for an optional St. Petersburg channel cruise. Around noon we go to the Moscow Railway Station and board the Sapsan high-speed train bound for Moscow. The train ride takes us through endless Russian landscapes along the River Volga. In the late afternoon we arrive to Moscow and check in at Hotel Azimut Smolenskaya**** or similar. 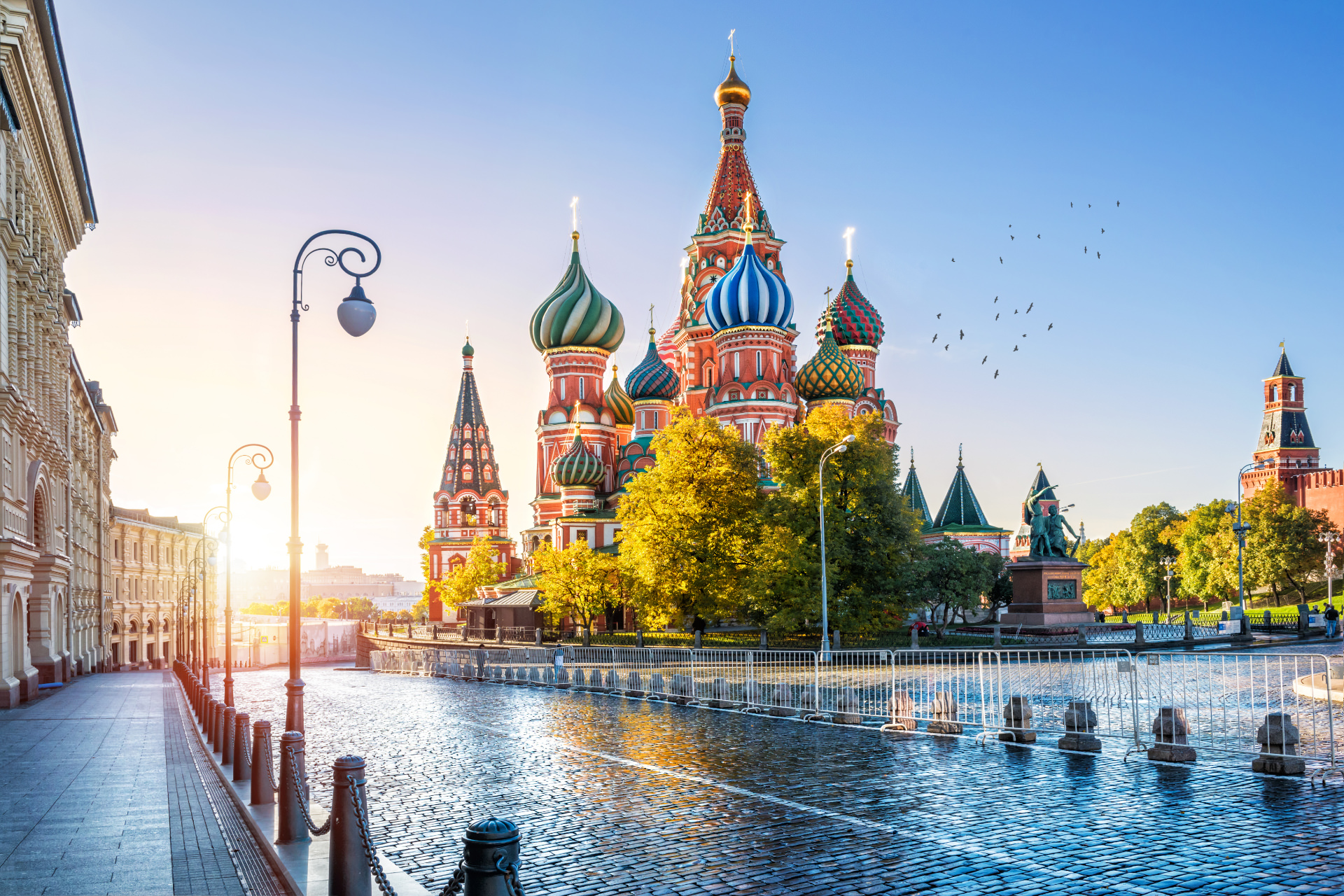 Day 7 Saturday: Moscow Moscow, The Mother of Russia, is a genuine Russian city with the Kremlin and its onion domed cathedrals. The dramatic changes over the last decade have made the city to one of the most dynamic metropolis in the world. The morning sightseeing tour includes the highlights of the vast city: the Red Square with St. Basil’s Cathedral, the Theatre Square with Bolshoi Theatre and Sparrow Hills with Moscow University and we visit the Kremlin grounds and one of the cathedrals. In the afternoon is offered an optional visit to the Moscow Metro including the historical stations on the Ring-Line and a guided stroll along the famous pedestrian Arbat Street. The evening offers an optional Moscow-by-night tour including an unforgettable river cruise with the White Flotilla.
Day 8 Sunday: Moscow The day offers an optional full day excursion to the quaint town of Sergiev Posad, where we visit the Trinity Lavra of St. Sergius, the most important Russian monastery and the spiritual heart of the Russian Orthodox Church. The whole Lavra has been beautifully restored for the 700-years celebrations of the birth of St. Sergius of Radonezh. 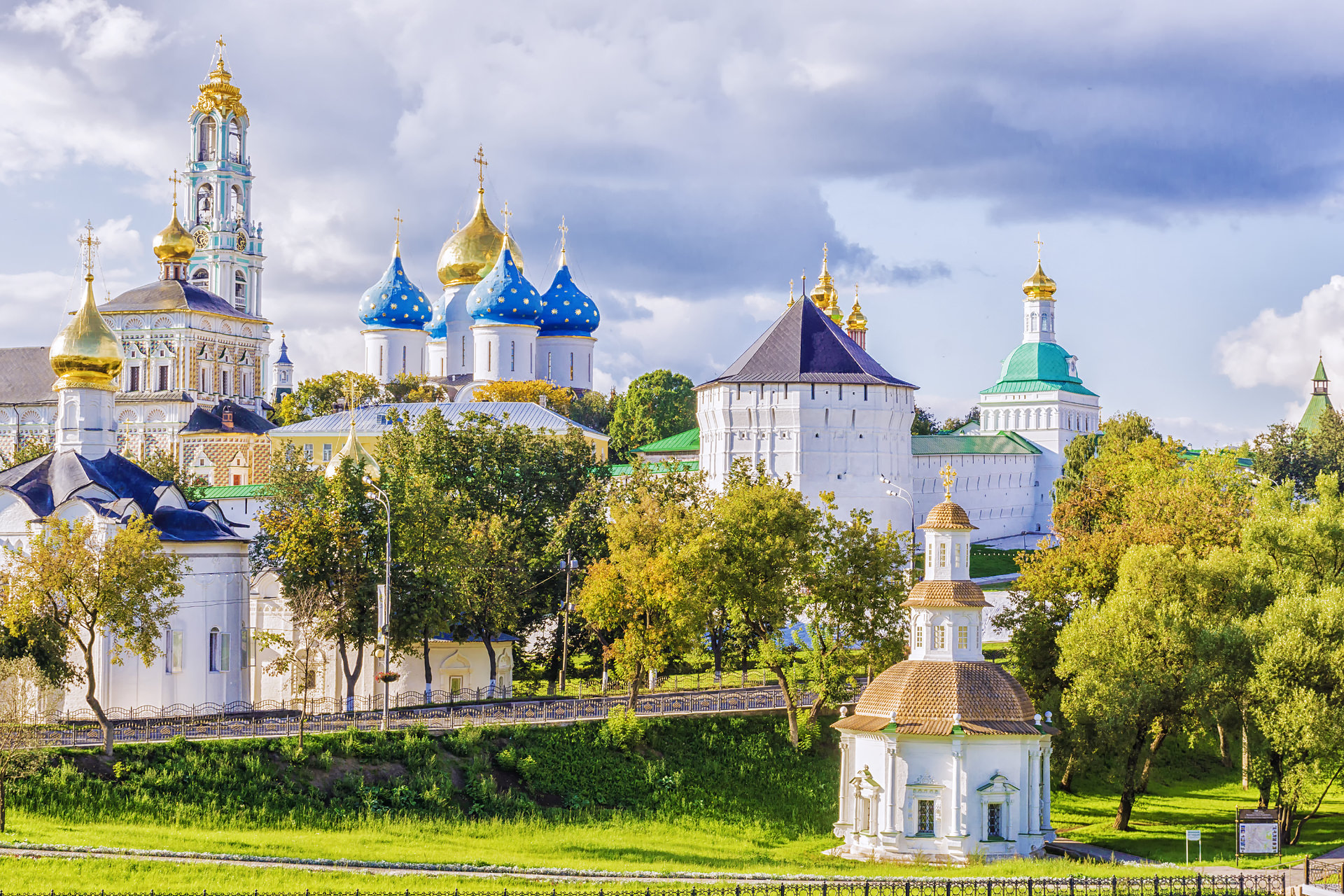